At the start of the war, he was in the Royal Welsh Fusiliers, but left and carried on his medical studies. He transferred to the RAMC in May 1916 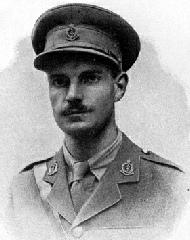