During his Victoria Cross action Thomas Sage was hit by 17 separate pieces of shrapnel, many were left in his body for the rest of his life 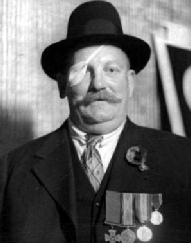