With the Royal Welch Fusiliers he took and carried the Queens colours, during the advance at the Battle of Alma, until wounded and did the same at Sebastopol until wounded. 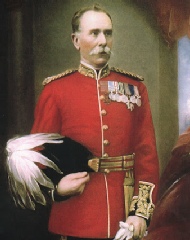