It was while serving in the merchant navy after the war, that he died of pneumonia, and was taken ashore and buried in Bermuda 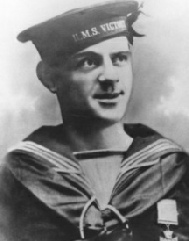