Headstone   Ashes   Plot/Grave no.   Garden of Remembrance (recorded as scattered, probably between trees beyond rose beds)

During the Second World War, serving as a Brigadier, in France in 1940. He laid low for two years, in occupied territory, before he made his escape to England via Spain 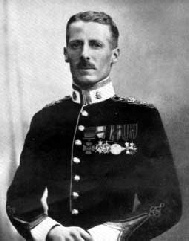