The Victoria Cross was held at the Buffs Regimental Museum Canterbury, but now is held by the National Army Museum, Chelsea 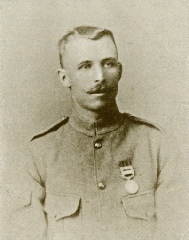