Original VC lost in action at Bronkers Spruit during the First Boer War, replacement given in June 1881, original later found and returned to the War Office on 18 August 1881

A new Headstone was erected in July 2014, due to the efforts of Glasgow City Council and the Victoria Cross Trust 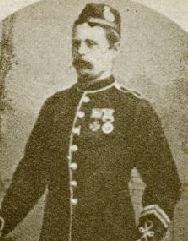