On a bombing mission after his VC action, his plane was hit by a bomb from another Lancaster above his, wrecking his plane he became a POW until the end of the war 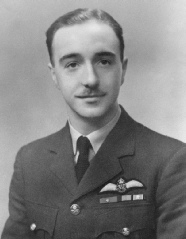