He enlisted at the age 15 he lied and said he was 18, he was discharged from the army, but re-joined when he was really 18 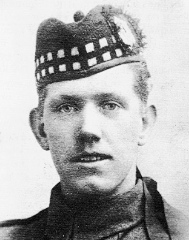