He was also known as Gerald Sexton, he deserted in January 1916, re-enlisted in May using mother's maiden name of Sexton 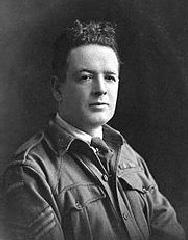