Place Of Death   Near Bucquoy, France

Having survived the Great War, he died in France in January 1940 and is buried on the battlefields of France 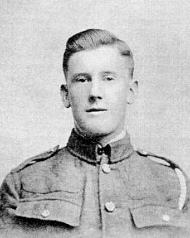