Headstone   Headstone (CWGC)   Plot/Grave no.   West side of church

He didn’t see out the rest of the war, dying in Ireland from the effects of gas 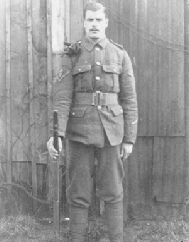