Rank End Of Career   The Rev. T/Chaplain to the Forces, 4th Class 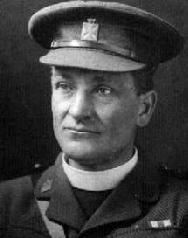