He was a Chauffeur before the war which put him in good stead for his war service as an Ambulance Driver. 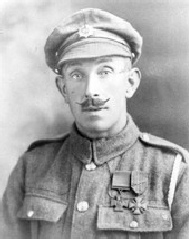