He drove four mates to a recruiting station, having a health problem, he thought he wouldn't get in. Of the five of them, he was the only one to be accepted 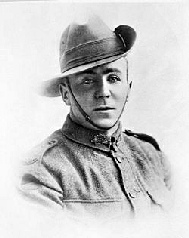