Having been captured and taken as a POW following his VC action, he was later presented to the Kaiser who congratulated him on a very fine fight 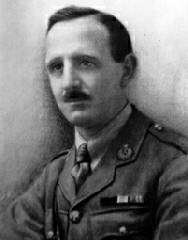