Place Of Death   Near Kassel, Germany

He died a week after the war ended, still a prisoner of war, of pneumonia 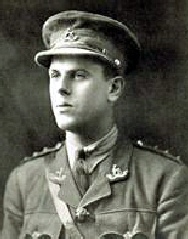