VC Presented   31 May 1918 by King George V at the Orthopaedic Hospital, Beckett's Park, Leeds to his widow

Buried with his Daughter 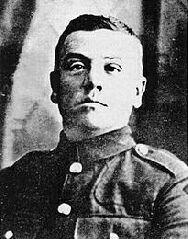