In the Second World War, Charles Spackman served in the Kings Royal Rifle Corps as a Sergeant-Major 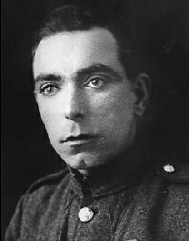