He was a good swimmer, and a fine footballer, playing for Walsall against Sunderland in the English Schools' Shield Final of 1910, aged 14 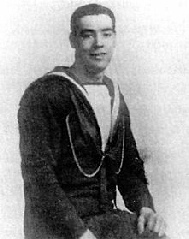