Place Of Death   Near Masnieres, France

He died on the 30th of November 1917, the day he should have received the Victoria Cross from the King at Buckingham Palace 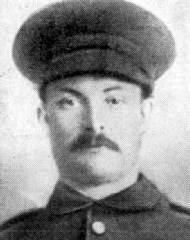