He's buried in Tyne Cot Cemetery, within site of were he won his Victoria Cross, 8 days before he was killed 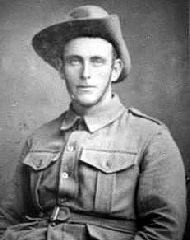