During the Second World War he was in charge of an Italian Prisoner of War Camp, and then became a probation officer in Lanarkshire 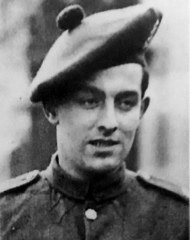