His grave was lost and subsequently found, a new headstone was erected on 1 November 1999, paid for by his family, Durham Light Infantry and the Light Infantry 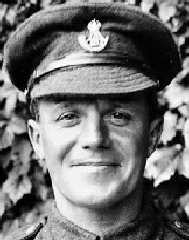