Place Of Death   Near Fontaine-les-Croisilles, France

Before the War he was an accountant 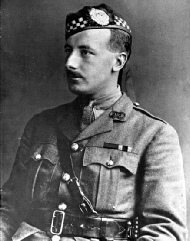