The Nickname for the Prince of Wales Leinster Regiment was the Royal Canadians, owing to that’s were the Regiment was formed 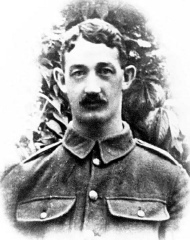