His Father was the Medical Superintendent at Glasgows Western Infirmary, Donald was going to enrol after the war 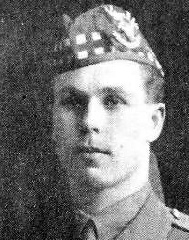