Whilst in a trench before Sebastopol, a live shell landed in amongst the guard. Without hesitation, he threw it over the parapet, thus saving lives. 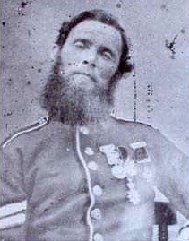