He was the first Victoria Cross winner to be given his medal by King George V in the field.

During the Second World War he served as a Chaplin to the Royal Air Force. 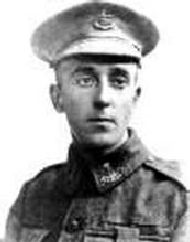