P  Named On Memorial Outside St Botolph Without Bishopgate Church, City Of London

Several poems and the song “The Hero” written in his honour 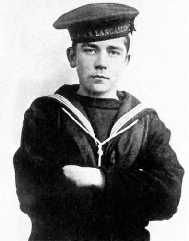