He lost an eye due to a bar brawl at the Lion Public House, Folkestone, Kent in November 1901 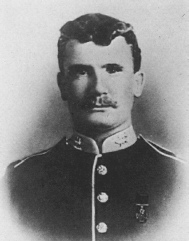