He died while being operated on, for the injuries he received during his VC action

Thank you to John and Judy Bartley, for photos from Gallipoli 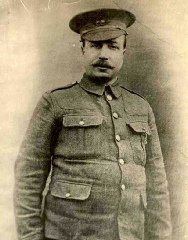