VC Presented   Registered post to Canada on the 28 August 1915 and then forwarded to his widow, Margaret Annie

He won the VC on his 48th Birthday 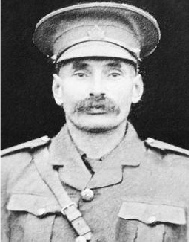