Darwan Sing Negi, retired from the army in 1920, with the rank of Subadar or Second Lieutenant 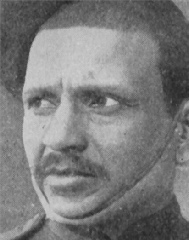