James Leach was born at Bowerham Barracks, Lancaster, his father being a Colour-Sergeant in The Kings Own Royal Lancaster Regiment 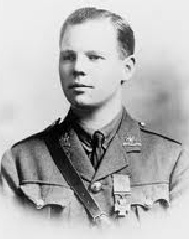