Saved his leg from amputation, when he refused permission to take it off, October 1914 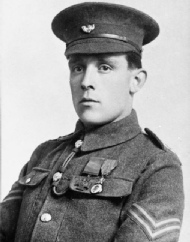 Thank you to Nick and Lorna Martin for the photos