VC Presented   1 December 1914 by King George V in the field at Locon, France

He managed to go through the whole war and VC action, without being wounded once 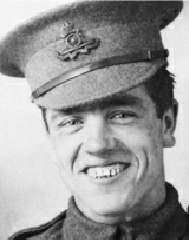