He was a shoeing-smith in the Royal Horse Artillery, with a troop of pom pom guns or light weight quick firing cannons 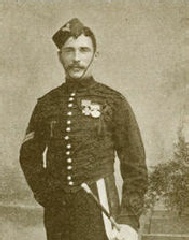