The nickname for the 5th Lancers was “the redbreasts”

Thank you to Terry Rogers, honorary archivist at Marlborough College 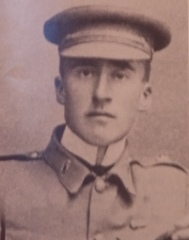