The regiment started out as Rimmington Guides after their commander, later when Rimmington left they became known as, Damants Horse 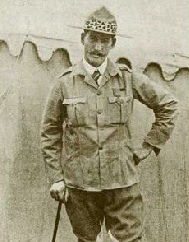