First member of a Canadian Regiment to be awarded the VC

Headstone erected 1994, not on exact location of grave 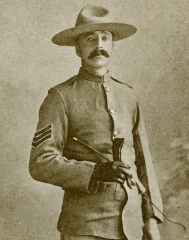