When he left the army, he returned and settled in South Africa 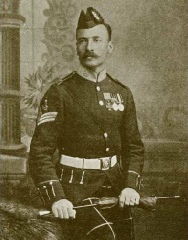