Played rugby for Ireland and the British Lions, and toured South Africa, with the Lions before the Boer War 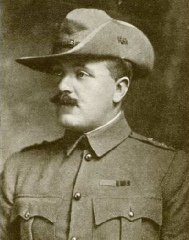