The VC was won in the Tirah campaign, which was to re open the Kyhber Pass again after an uprising of local tribes 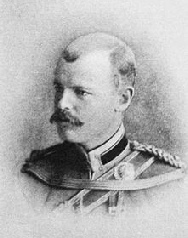