A new headstone was erected in Kensal Green Cemetery from money raised by the Victoria Cross & George Cross Association, in 2006 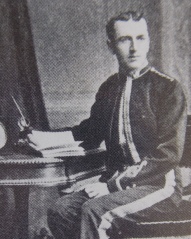