Original VC sent to Egypt in 1884 for presentation, however, Marshall had since returned home and replacement was prepared and presented, original returned to War Office 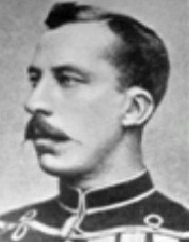