Place Of Death   Near Larnaca, Cyprus

Name shown as M'Gaw on some records 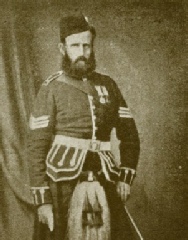