When he drowned in a boating accident, it is still not certain wether a body was recovered or not, so there is no grave 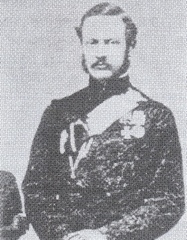