Internment certificate records that he was 56, headstone also shows age as 56 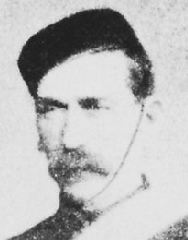