The regiment, The 1st Bengal European Fusiliers, was a private army of the East India Company, transferred into the British army after the mutiny. 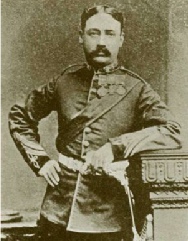